Payday loans BC have a repayment term of 62 days or less, and the maximum principal amount that can be loaned is $1500. Less than ten years ago, the highest possible interest rate charged was lowered from 30% to 23%. It was later reduced to 17%, alongside a combination of other measures that were implemented to rescue consumers of payday loans BC from a vicious cycle of debt.

Regulation of Payday Loans BC

Due to the rising number of payday lenders with the ability to provide their services online or through the phone, consumer protection has also become important. This is because unscrupulous lenders bring about unethical practices such as debt rollovers, disclosure requirements, and elongated repayment terms. This is why the Consumer Protection office of British Columbia is strictly regulating the industry. The government is looking to promote innovative low-cost alternatives, community partnerships, consumer education, and better methods to protect consumers in general.

A loan agreement is an arrangement between you and a lender that allows credit to be forwarded to you. It outlines details such as the loan amount, the amount due plus interest, the repayment term, the business details of the lender, your personal data, among others. It is necessary for all the information in this document to be straightforward and precise to allow you to understand it. It should also contain all the terms and conditions of the loan displayed visibly.

The principal amount of payday loans BC is limited to not more than 50% of your cumulative net pay within the repayment term. This provision also restricts a lender from offering two concurrent loans to the same borrower. The new laws also lower the borrowing charge from 23% to 17%. The penalties for those who contravene these rules are very severe, and one can even lose their license.

There are laws in British Columbia that seek to protect consumers of high-cost financial assistance. These laws equip payday loans BC users with rights for loan cancellation and protection against disclosure. They also prevent extended repayment periods and rollovers.

Such rights allow for the repayment term to be spread out over three payments if the borrower is receiving the third loan within a period of two months. Borrower rights also provide for penalties and refunds if you are overcharged, and prosecution for the more serious violations.

Payday loans BC support repayment through a pre-authorized debit or a post-dated check. However, a lender cannot take up any personal belongings as security for the loan. They cannot be used as security on property, protection for bank overdrafts, or as a surety. 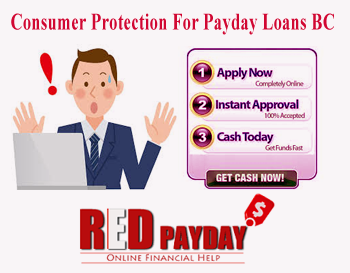 It is important to mention that as a consumer of payday loans BC, you should have proper knowledge of the loan structures and rights afforded to you so as to avoid ending up in debt. It puts you in a firm position to analyze your financial situation, consider other alternatives, and decide whether it is necessary for you to take one up.