In 2016, the government of Alberta proposed a bill that would be the Act to End Predatory Lending. Based in Alberta, Canada, the city of Edmonton would also be affected by these new regulations once the bill is passed. They main aim is to protect the residents of Edmonton from a vicious cycle of debt brought about by the high interest rates associated with payday loans. Therefore, by hardening the regulatory framework around payday loans Edmonton, the government of Alberta is reducing the cost of lending and protecting borrowers.

The proposed laws seek to reduce the payday lending interest rates from 23% to 15%. This reduced rate effectively makes it the lowest rate across Canada. Payday loans Edmonton may sometimes bear a cumulative annual interest rate of 600%, which is very high considering the loans are only short-term. Before the law is enacted, the Criminal Code of Canada has a provision that allows payday loans to surpass the maximum annual interest rate of 60% because they are regarded mainly for extraordinary circumstances and the short repayment period.

The Act to End Predatory Lending also forwards that lenders should be allowed to make repayment in installments for a maximum period of two months. This also contributes to the reduction of annual interest rates and any individual payments made. The ability to make repayments in installments is crucial because it enables you to manage your debt properly. Managing your debt by stretching the payments into smaller chunks will make it possible to completely repay it before the expiry of your loan’s term. 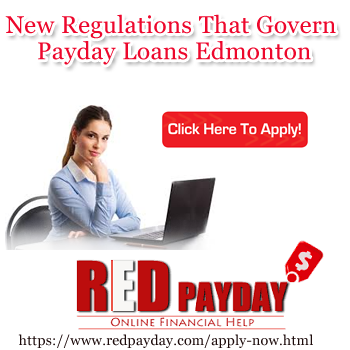 Although payday loans Edmonton are a quick source of financial support, certain practices by exploitative lenders usually bury the consumers of payday loans under a mountain of debt. The government of Alberta forwards that any loans that make it impossible for borrowers to make ends meet because they have to take up another loan to repay the previous one are very predatory. This is called a rollover and is one of the most common industry malpractices. Others include renewals and usury.

However, the advocates for payday loans Edmonton suggest that such stringent measures will result in decreased lenders or the eventual collapse of the industry. They can directly or indirectly lead to job losses and the closure of businesses and stores that offer payday loans. Also, if the number of lenders goes down, it will cause a corresponding decrease in the availability of quick funds.

The highest amount of money that can be requested through payday loans Edmonton is $1500 and can be paid back in two months. The most important factor here is that information provided by borrowers is kept strictly confidential. The payday loans system in Edmonton is reliable, fast, and private.

The requirements of Online payday loans Edmonton include the following:

However, it is important to note that there is no requirement for any other information such as bank statements to be faxed to the lender. The reason for this is that payday loans Edmonton do not rely on your financial background as a borrower, but on the availability of your next paycheck.

The process of approval lasts for a very short time, and in most cases, the borrower is informed by phone on the approval status. Once approved, a loan can take about 24 hours or less to receive the funds.

Because of the large number of borrowers, it becomes important to regulate the loans Canada industry. This is because there will be some lenders with unscrupulous practices seeking to make money off vulnerable borrowers. This is why it is prudent to be fully knowledgeable of the system and its regulations when taking up payday loans Edmonton.